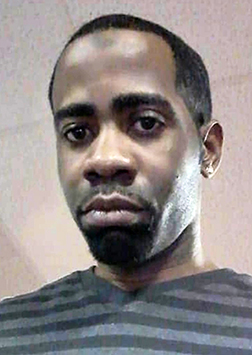 Tyler Randolph Eugene Williams, born Nov. 24, 1984, to Ted R. Williams Sr. and Brenda Miller-Williams in Orlando, Fla., unexpectedly departed this life on Friday July 17, 2020.
He was a member of the Embassy Christian Center, Church of God in Christ, Sylva/Cherokee, North Carolina. Drs. Will and Brenda Chambliss, his mother and stepfather are the pastors.
Tyler is the youngest of five children. He is a graduate of Interlachen High School and received his high school diploma and was in the class of 2003, and graduated from the Flagler Career Institute earning a certification in Cosmetology in Palm Coast, Fla. He was a great cook and spent many years in the food industry. Like his grandfather, he did roofing, masonry, landscaping, and stucco. He was also employed at the Hawaiian Tropic in Daytona Beach Fla., and worked with independent contractors after the hurricanes.
Tyler was an extremely hard worker and said, “There’s always work if you look hard enough.”
Tyler was well liked among his family, especially by his nieces, nephews and cousins. Coming to Murphy from Florida, Tyler worked for the Embassy Liberia Missions picking up donations and packing the storages. He worked with the Faith Works Mission to Cherokee for our back to school notebook outreach. Tyler also worked at the Embassy Christian Center Church while we were at the Mountain Vista Inn where Dr. and Mrs. Kong totally fell in love with him. He also worked at the Mountain Vista Inn doing maintenance and small repairs.
Tyler had a passion for sports and in high school he played football. He and his dad often made jokes about their favorite football team, the Florida Seminoles. Tyler went against his father’s team of the Florida Gators and was an avid Seminole fan. He loved his dad and took after him with his passion for football, but his dad lost that battle. His stepmother Gloria never tried to intervene in this battle. As everyone knew Tyler was a Seminole through and through. Some may say he was their No. 1 fan.
Tyler had a love for people and always chose to see the best in people even when they may not have earned it or some may say, deserved it. This at time was one of his biggest faults.  But that love earned him many friends in his life.
Tyler was raised from birth by his parents in the church. Growing up in a Christian home he was instilled with values that at times he fought against, but they were ingrained in him. Tyler loved his brothers and sisters although there was a time where he struggled to find his place among his siblings. But he found it.
Tyler was the most street wise out of all his siblings, earning him the nickname “Street.” Everyone always knew that Tyler was the person you would want with you if you needed to survive on the street. He had a wisdom and boldness that surpassed any type of training. Tyler was not one to back down from a challenge and he loved just as hard. Especially the love that he had for his family.
Many of Tyler's siblings may have thought at times that Tyler was spoiled, even though he had his own apartment, worked two jobs and side jobs when they were available, his mother Dr. Brenda Miller-Chambliss and his stepfather Dr. Willie Chambliss continued to be there for him, especially during the corona virus.
Before moving to North Carolina, Tyler lived in Palm Coast, Fla., with his Uncle St. Clair Kennedy and Aunt Cassandra Kennedy.
Tyler was preceded in death by his maternal grandparents Deacon Eugene Miller Sr. and Queen Ollie Bivins-Miller; paternal grandparents, Eddie and Annie Mae Williams; his uncles, Deacon Eugene Miller Jr.  and Deacon Larry Miller Sr.; Aunt Evelyn Taylor and niece Tierra Williams.
Tyler leaves to forever cherish his memories: his father Ted Roosevelt Williams Sr. (Gloria); mother, Dr. Brenda Miller-Chambliss and stepfather, Dr. Willie C.  Chambliss; his siblings from oldest to youngest: sister, Teral (Marcus) Peck; brother, Ted (Alfreepha) Williams; brother, Travis “Trae” (Yolanda) Williams; sister, Theresia (Tekulve) Jackson; aunts and uncles, Ophelia Maxine Miller Ogburn (Apostle Willie Ogburn, Jr.); Cassandra Miller Kennedy (Minister St. Clair Kennedy); Leonardo D. Miller (Karen); Eddie Williams Jr.; John (Florita) Williams; Margaret (Willie) Shaw; and a host of nieces, nephews and cousins, and sorrowing friends.
The family received friends from 10 a.m. to noon Tuesday, July 21, followed by a private memorial service at 1 p.m. Because of the Corona Virus, we will ask that you wear a mask in order to share your condolences.
Flowers are welcome or tax donations may be made to Embassy Christian Center Church of God in Christ Missions Outreach, https://body-builders-television-network.square.site.
Ivie Funeral Home, Murphy, was in charge of all arrangements.
An online guest register will be available to sign at iviefuneralhome.com.