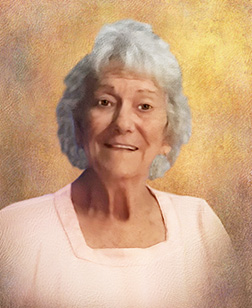 Thelma Rose Martin, born in Bassett, Va., on Dec. 24, 1931, passed away Tuesday, Feb. 4, 2020.
She is survived by her five children: Terry Clay Martin of Hayesville, Michael Anthony Martin of Laurel Fork, Va., Patrick Edward Martin and wife Lena of Murphy, Lisa Rochelle  McMain of Cumming, Ga., and Scott David Martin of Asheville. Thelma is also survived by eight grandchildren and four great-grandchildren.
She now joins her husband, Joseph O. Martin, and son John. Thelma had a long, wonderful life full of ups and downs as you would expect. However, there is something important to be remembered here as she passes. Something at risk of being forgotten in today’s complex world of technology and superficial social connection.
Thelma was born in Bassett, Va., and grew up in Mount Airy, a small town in rural America. Her husband, Tony, worked away most of their married life on board oil tanker ships and later, as an iron worker constructing suspension bridges and high rise buildings such as the Pan Am building in New York City and the Wachovia Bank building in Winston-Salem, so he was often away from home.
Thelma and her children ran a farm in southwestern  Virginia for many years. During this time all of the responsibility of the homestead fell on Thelma’s shoulders. She raised the children, tended the animals and garden, paid the bills and dealt with every adversity with determination and grit.
She would turn heads when she put on her makeup and got all “dolled-up” to go out with her husband. She was strikingly beautiful and wonderfully graceful as she aged.
If you were kind to her and her family, she loved you to death. But if you crossed her or those she loved, her stare would make you shake in your shoes.
She was fiercely loyal to her family. She was honest deep down to her bones.
She was a lovely, wonderful woman who bore the responsibilities of the time and age she lived in with a smile. She loved babies with a passion and stated at the ripe old age of 88 that she would have another baby today if she could.
If you knew her in her later years, you would never know about her challenges in raising a family because she believed life was about “doing what you are supposed to do.” Thelma never complained. She felt a sense of honor in making sure the life of everyone around her ran as smoothly as could be. Thelma raised her family quietly and confidently.
Without Thelma, and the many women like her, America would not be what it is today. Women like Thelma Rose Martin deserve to be remembered.
A memorial service was held at 5 p.m. Saturday, Feb. 8, at Townson-Rose Funeral Home Chapel in Murphy. The Rev. Calvin Murphy officiated.
You may send tributes to the Martin family at townson-rose.com.
Townson-Rose Funeral Home was in charge of all arrangements.