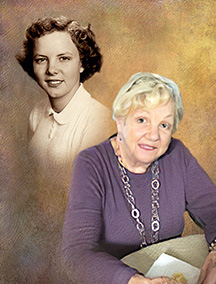 Lenora Reece Caldwell, 85, of Brasstown, passed away Monday, May 18, 2020, at her home.
Lenora was a native of Clay County, and daughter of the late Arthur T. and Doris Miller Reece.
She worked both at the Clay County Progress and Cherokee Scout for many years.
Lenora was a lady of many talents. She was a self-taught pianist and enjoyed playing at church. Lenora enjoyed being outside with Charlie in their garden, planting flowers, picking berries or taking care of the baby goats.
She was as talented inside the walls of her home as she was outside. She enjoyed carving, knitting, sewing and cooking for her family get-togethers.
She was a wonderful mother and wife, and had the gift of making each family member feel loved.
Lenora was also very athletic and enjoyed playing golf. She was a graduate of Hayesville High School, where she was a star basketball player. After the girls became adults, Lenora formed their own basketball team, which became an extremely competitive contender of women’s basketball. She even beat one of her daughters in a 5K race.
She and her daughters enjoyed many fun adventures, including being contestants on the television show Family Feud.
Lenora loved the Lord and her church family at Pinelog Baptist Church.
In addition to her parents, she was preceded in death by two brothers, Arthur “Buck” Reece and Rex Reece; two sisters, Maebur Jones Bauer and Alice Mauney Bourne; and one grandchild, Brandon Taylor.
Lenora is survived by her husband of 20 years, Charlie Caldwell; one son, Aaron Martin and Jill of Denver, N.C.; two stepsons, Robert and Robin Caldwell of Brasstown, and William Caldwell and Dusty of Morganton; four daughters, Vicky Taylor of Brasstown, Peggy Wells and Steve of Murphy, Sandy Hardin and Cecil of Andrews, and Myra Dyer and Lonnie of Blairsville, Ga.; one brother, Max Reece and Mary of Warne; one sister, Opal Reece Rose and Frank of Hayesville; 10 grandchildren, nine great-grandchildren and two great-great grandchildren.
A private family service will be held at Pinelog Baptist Church with the Revs. Kevin Miller and Aud Brown officiating. Interment will be in the Scroggs family cemetery. Pallbearers will be Doug Thrasher, Mason Thrasher, Eddie Eller, Parker Caldwell, DeWayne Wells and Bryson Hall. Honorary pallbearers will be Steve Wells, Cecil Hardin, Lonnie Dyer, Claude Mauney, William Caldwell and Robert Caldwell.
The family received friends from 1-2 p.m. Thursday, May 21, at Pinelog Baptist Church in Brasstown.
In lieu of flowers, memorials may be made in memory of Lenora Reece Caldwell to Pinelog Baptist Church, 65 Pinelog Church Road, Brasstown, NC 28902.
You may send tributes to the Caldwell family at townson-rose.com.
Townson-Rose Funeral Home was in charge of all arrangements.