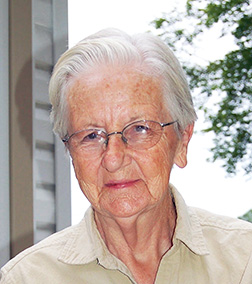 Geneva Katherine West Boring , 97, went home to be with her Lord and Savior on Tuesday, Nov. 17, 2020, with her family by her side.
Geneva was born in the Liberty Community of Cherokee County to the late Marshall and Mary West.
She married Earnest Hoyt Boring in 1943 and was the mother to five children: Linda, Ernie, Pat, Sharon and Angela.
She was a lifetime member of the community where she was a devoted wife, mother, sister and friend. She was also a faithful member of Liberty Baptist Church her entire life.
Geneva’s greatest pleasure was found working in her garden, growing beautiful flowers, and canning the fruits and vegetables she produced. She loved cooking and baking as well. For those fortunate enough to sit at her table, you knew her cooking was second to none.
Throughout her life, Geneva experienced many changes in our great nation’s history. From the Great Depression to World War II, living to see 15 sitting presidents, and watching power come to the community for the first time. She learned to persevere in the toughest of times.
Geneva’s strong will and faith in the Lord allowed her to have a profound impact on all who knew her. She was known by many as “One of the strongest women we ever knew.” Though she will be sorely missed, she is rejoicing in heaven with the loved ones who went before her.
She was preceded in death by her husband of 70 years, Hoyt Boring, and grandchildren, Katie and E.L. Pope.
She is survived by her children, Linda (Kohlan) Flynn, Ernie Boring, Pat (Sue) Boring, Sharon (Ronnie) Westmoreland, and Angela (Lewis) Pope. She is also survived by her grandchildren, Michelle (Harry) Mills, Marshall (Molly) Boring, Jennifer (Travis) Zarins, Lindy (J.P.) Rose, Isaac (Anne) Boring, Amber (Justin) Wills, Erin (Brandon) McFaddin, Barry (Amy) Westmoreland, Betsy (Martin) Wintermantel, Emily Pope, Laurie Pope and Olivia Pope; great-grandchildren Caden and Addison Zarins, Savannah and Jared Wills, Lillian and Brody McFaddin, Jake Boring, Kate and Jack Boring, Madalyn and Harrison Mills, Isabella and Alina Wintermantel, and Nathaniel and Liberty Westmoreland.
Geneva will be laid to rest with her family by her side on Friday, Nov. 20.
In lieu of flowers, the family asks that donations be made to Liberty Community Cemetery in her memory. Donations can be sent to Arthur West, 340 Liberty Road, Murphy, NC 28906.
You may send tributes to the Boring family at townson-rose.com.
Townson-Rose Funeral Home is in charge of all arrangements.