In this week’s archives of the Cherokee Scout and Andrews Journal: 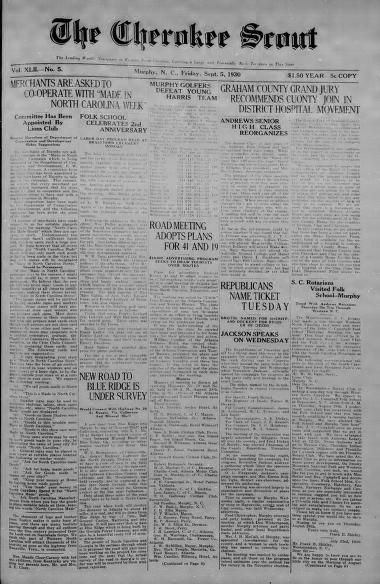 10 years ago: The Andrews Wildcats football team opened the season with a smothering 48-30 victory over Thomas Jefferson Academy. Junior running back Jordan Collins rushed for 255 yards and three touchdowns before sitting out the fourth quarter. This was the first time since 2004 that the Wildcats opened their season with a victory.

Efforts to rebuild the historic Cherokee County Courthouse in Murphy were speeding forward, with architects touring the courthouse and old jail. The renovation was drawing ire from citizens who felt the county was “spending just for spending’s sake,” and would rather see any budget surplus used toward lowering taxes. Update: The courthouse’s renovation and expansion plan was approved.

25 years ago: A seat-belt dragnet in Cherokee County nabbed 123 non-bucklers over the Labor Day holiday weekend. State troopers established four of the 173 checkpoints set up in western North Carolina as part of the operation, which resulted in six local residents cited for driving under the influence, 18 for speeding and three charged with criminal violations, including drug possession.

A public hearing for the purpose of naming all of the state roads in the Hothouse, Notla and Shoal Creek Townships was set to be held. Naming all of the county’s roads would be a major step completed before the county’s enhanced 911 system could be functional, coordinator Darren Watkins said.

Workers were busy installing a new cable television system, according to Murphy Cable TV President Harold Shook. He said two crews were wiring houses for the cable system, while another crew was installing signal-receiving equipment on Fain Mountain. The system was expected to be completed in October, “in plenty of time for the World Series,” Shook added.