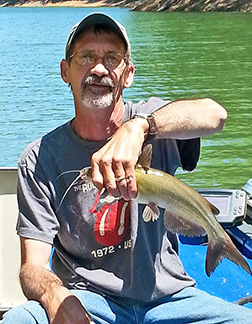 Charles “Tony” Doss, 63, of Murphy, passed away Wednesday, July 22, 2020.
He was born in Fort Polk, La., to Sylvia Doss and the late Charles Doss.
Tony served in the United States Navy, and was a material handler at Moog Manufacturing.
Tony and his wife, Paula, met in high school and reunited on July 3, 1997. He moved to Fort Myers, Fla., on Christmas Eve 1997. Tony married Paula on May 2, 1999, and married into a pre-existing family. He loved her children as if they were his own.
He was kind-hearted, a great friend and brother. Tony loved music, his guitar, fishing, being outside, campfires and the tractor.His favorite place was home. He was very smart. He will be missed.
He is survived by his mother, Sylvia Doss; his wife, Paula Doss; one son, Naython Wells (Nora Heckerman); two daughters, Nicole Willis (James Hay) and Jessica Rogers; two brothers, Mike and Robert Doss; two grandchildren, Scarlet Wells and Zackery Sharp; and several nieces and nephews.
Funeral services were held at 3 p.m. Monday, July 27, at Townson-Rose Funeral Home Chapel in Murphy with military honors rites being conducted by American Legion Post 96 Murphy, American Legion Post 532 Hayesville, VFW Post 6812 Hayesville, Marine Corps League Marble, and Vietnam Veterans of America. Nathan Rose officiated.
The family received friends from 1-3 p.m. Monday, July 27, at Townson-Rose Funeral Home Chapel in Murphy.
In lieu of flowers, the family requests donations be made in his honor to The ALS Foundation, 1300 Wilson Blvd., Suite 600, Arlington, VA 22209.
You may send tributes to the Doss family at townson-rose.com.
Townson-Rose Funeral Home was in charge of all arrangements.