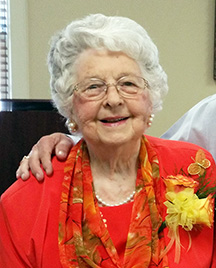 Virginia Gregory Cox, 100, of Andrews, went home to be with her Lord and her many friends, on Monday, June 15, 2020, at Murphy Rehabilitation & Nursing, and now she has her wings.
She was the daughter of the late Andrew Jackson Gregory and Bessie Crisp Bramlett. In addition to her parents, she was preceded in death by her husband of more than 41 years, Woodrow W. Cox; and a son, Tony Cox.
Surviving is a son, Jerry Cox and Linda Griffith. She had one granddaughter, Susanne Cox; two grandchildren, Brady and Courtney; step grandchildren, Brian and Sandy Curtis and Dylan Curtis of Warne, and Shylon Curtis White (deceased) and Daratha Curtis of Andrews, Jamie and Shasta Martin, and Amber, Austin and Andrew Martin of Marble, Tina Mechstroth and Lana Ponce and Dalton and Dillon Sims and Brian Sims (deceased) from Dayton, Ohio. She also had many close and dear friends she loved so much and tried to be an inspiration and advisor to her younger friends.
She was a resident of Cherokee County since coming to Andrews in 1948 and was the oldest member of Andrews First Baptist Church, where she was very active in her church activities and programs.
She was the first route sales lady with The Tom Huston Peanut Company of Columbus, Ga., for many years.
She was the first manager of the Andrews Sunshine Club, a nutritional program for the elderly in the Andrews area for about 26 years and was very devoted to this program. After retiring, she continued working for recognition of older citizens.
Funeral services were held at 2 p.m. Monday, June 22, at First Baptist Church of Andrews. Visitation was from noon-2 p.m. The Rev. Al Hood officiated. Entombment was in Woodlawn Memorial Park Mausoleum in Greenville, S.C.
In lieu of flowers, please make donations to the Andrews Sunshine Club, and mail to Denise Cross, c/o Andrews Sunshine Club, 69 Alpine St., Murphy, NC 28906.
You may send tributes to the Cox family at  townson-rose.com.
Townson-Rose Funeral Home was in charge of all arrangements.