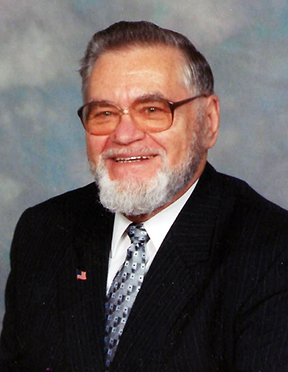 The Rev. Frank Hamilton, 86, of Andrews, went home to be with the Lord Saturday, Oct. 5, 2019, at his residence.
He was a native of Kearny, N.J., and later served in the United States Army and was a Korean War veteran.
Frank worked as a long-haul truck driver before God called him into the ministry.  Frank graduated from Reformed Theological Seminary in Jackson, Miss., where he received his Master’s of Divinity degree.
He pastored in Mississippi and was called to Andrews Presbyterian Church in 1990, where he later retired. He then followed God’s calling to minister in Scotland the next five years.
Upon returning to the United States, he was called back into ministry to Indiana and eventually returned to Andrews Presbyterian Church in 2011, retiring for a second time in 2018.
In addition to the churches, he worked with the Hebron Colony and Good Samaritan programs.
Frank was a member of the Lions Club in Mississippi, North Carolina and Scotland. He loved the outdoors and enjoyed hiking on the Appalachian Trail. He was chaplain and member of VFW Post 7620 in Andrews.
He was the son of the late Frank Edward Sr. and Jennie Alexander Hamilton.  He was also preceded in death by a sister, Dorothy Szalkowski; and a son-in-law, Alford Kimble.
Surviving are his wife of 64 years, Helen Sawyer Hamilton; two daughters, Nancy Kimble of Peachtree and Elizabeth Derreberry and husband Douglas “Doodle” of Andrews; three sons, Richard Hamilton and wife Teresa of Highlands Ranch, Colo., Russell Hamilton and wife Cynthia of Ellijay, Ga., and Robert Hamilton and wife Allison of Andrews; a brother, David Hamilton of Georgetown, S.C.; 13 grandchildren, and 13 great-grandchildren.
A Celebration of Life will be held at 2 p.m. Saturday, Oct. 12, at Andrews Presbyterian Church with the Rev. Larry Wilson officiating. Military honors will be provided by Hayesville VFW Post 6812, Hayesville American Legion Post 532 and Murphy American Legion Post 96.
The family will receive friends from noon-1:50 p.m. Saturday, Oct. 12, at Andrews Presbyterian Church prior to the service.
In lieu of flowers, the family requests memorials be made in memory of the Rev. Frank Hamilton to: Gideons International, P.O. Box 164, Murphy, NC  28906.
Ivie Funeral Home, Andrews, is in charge of all arrangements.
An online guest register is available at iviefuneralhome.com.