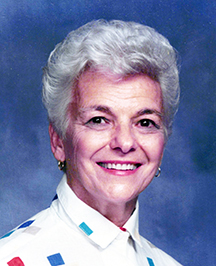 Marguerite C. Seraphin, 93, of Murphy, passed away Friday, July 3, 2020, at her residence.
She grew up in Durham, Conn., before moving to Tolland, Conn., where she resided until moving to Murphy in 1984 with her husband. While in Connecticut, she worked alongside her husband at Ray Seraphin Ford for 20 years. After moving to Murphy, Marge was co-owner of Colonial Plaza and the Avon Store.
She was a member of St. William Catholic Church. She had a love and deep care for dogs and other animals.
She was the daughter of the late Edigio and Evelyn Invernizzi Camozzi.
Marge was preceded in death by her husband of 50 years, Raymond Joseph Seraphin, who died Nov. 26, 2007. She was also preceded in death by a daughter, Pamela Ensign; a grandson, “Tupper” McCusker; and a brother, Angelo Camozzi.
Surviving are a son, Raymond John Seraphin, of Tolland, Conn.; a daughter, Deborah Rae McCusker, of Portland, Maine; a niece, Betty Leining of Murphy; four grandchildren, Carrie Ann McCusker, Erinn Heather McCusker, Ethan Raymond McCusker and Bruce Arthur Ensign Jr. and wife Mica Ensign; several great-grandchildren; and a dear friend, Cindy Hood and husband Jack of Murphy.
In lieu of flowers, the family requests donations be made in memory of Marge Seraphin to Valley River Humane Society, P.O. Box 658, Murphy, NC 28906.
Ivie Funeral Home, Murphy, is in charge of all arrangements.
An online guest register will be available at iviefuneralhome.com.