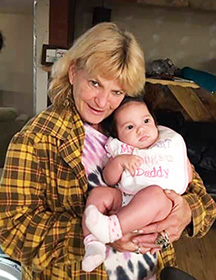 Lorelei Carolyn “Penny” (Dike) Chambers, 56, of Andrews, passed away unexpectedly Saturday, Jan. 30, 2021.
She was born March 3, 1964, in Jacksonville, Fla.
She was preceded in death by her parents, Murray E. Dike Sr. (1986) and Dorothy H. (Balius) Dike (2015). She was also preceded in death by her husband, the late Phillip L. Chambers Sr., who died May 15, 2020. They were married on March 17, 2005, until his demise.
She is survived by her stepdaughter, Amber Melkoumova (Ted) of Fayetteville, and her stepson, Phillip Chambers Jr. (Pearle) of Fayetteville; two sisters, Victoria S. Donahoo of Tampa, Fla., and Michele D. Kindrew of Tampa, Fla.; one brother, Murray E. Dike Jr.; and two step-grandchildren, Chase Chambers and Phillip L. Chambers III. She was also preceded in death by a brother, Stephen J. Dike (2006), and is survived by many loving nephews, nieces and friends.
Garrett Funeral Home of Waynesville is caring for the arrangements.
No services are planned at this time.
A guest registry is available online at www.garrettfuneralsandcremations.com.