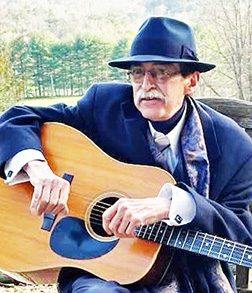 David A. Brose passed away peacefully at home in Geisky Creek, N.C., on Friday, Jan. 22, 2021, at age 69.
Known nationally as a versatile musician, impeccable dresser, and long-time folklorist at John C. Campbell Folk School, David was born in Columbus, Ohio, on May 17, 1951. He grew up in a neighborhood there called “the hilltop,” where Appalachian people settled for work in local factories after World War II. Of German Appalachian heritage, Brose grew up among those people and began to play the banjo in 1958.
In the 1960s, he had moved deeply into the music of the folk tradition, and in the early 1970s, Brose began his studies at the Ohio State University as a folklore major, putting himself through college teaching guitar and banjo at the Columbus (Ohio) Folk Music Center. He went on to found Ohio Folklife Inc., a non-profit organization through which he received grants from the Ohio Arts Council to produce two record albums based upon his field recordings.
In 1982, Brose received a master’s degree in ethnomusicology from Indiana University, and that same year became Colorado’s State Folklorist. He served as folklorist at John C. Campbell Folk School in 1991-2019.
Brose carried on in the tradition of Alan Lomax, traveling into the backwoods and “hollars” to find, document, participate in, and reveal to others the musical roots and treasures of the Appalachian culture.
He maintained an active performing career throughout his life, although a fieldworker at heart, loving nothing better than documenting traditional music in the field and sharing it via radio and other media. He played guitar, banjo, mandolin, ukulele and the kora, a West African 21-string folk harp.
In performances, he sang and played ballads, folksongs, blues, ragtime instrumentals, banjo tunes, and kora melodies, utilizing old-time music performance styles and repertory, as well as music and songs from the early-to-mid-1960s folksong revival. An evening’s performance with David Brose was informative, educational, fun and entertaining, as he was a humorist and raconteur.
He also enjoyed displaying his talents and knowledge as a D.J. on local radio having worked both at WCQS in Asheville and on his own radio show “Stacks of Wax” in Young Harris, Ga., where he delighted his audience with an eclectic array of tunes.
Music was David’s primary passion but he was a multifaceted man as well. He greatly enjoyed cooking and eating fine foods, nostalgic old (black and white) films, corny jokes and pointed puns. And, no one was better at decorating a house and yard for Halloween.
Brose was a champion of social justice, ready and willing to treat others with respect and dignity.
David is survived by his former wife, Kathleen Seacrest, and their musician son, Austin, in addition to sister Sharon, brother-in-law Earle Mamain, nephews Jesse and Eli, and brother Gary.
Austin said about his father: “My dad’s livelihood was defined by his neverending diligence to collect, preserve and perform music. His vast contributions to the fields of folklore and ethnomusicology are innumerable. His influence wide reaching and profound. Others’ lives and art lived through him, and his life and art lives through others.
“To all he met and knew, he was a truly incomparable and unforgettable character. My father had an extensive community of friends, and the outpouring of support and concern for him and our family has been tremendous, and for that we are endlessly grateful.”