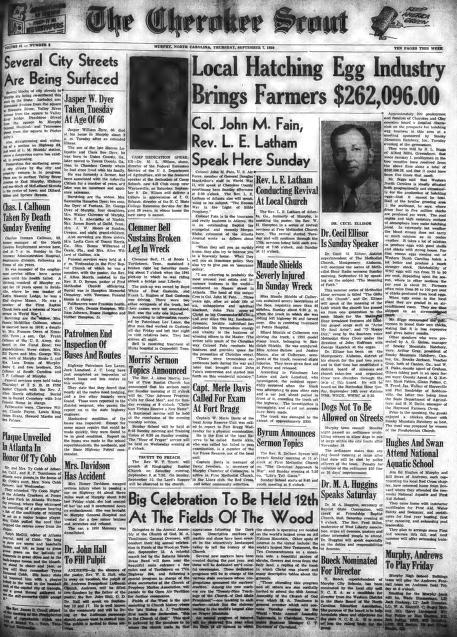 In this week’s archives of the Cherokee Scout and Andrews Journal:
10 years ago: More than 20 vendors with food, arts and crafts from all over western North Carolina were set up at the Andrews Train Depot to wave in the Great Smoky Mountain Railway. The train was expected to arrive from Bryson City with more than 150 travelers. Andrews Chamber of Commerce President Mike Shiedy said that he was expecting the railway to leave a caboose at the depot to put on display. Update: A caboose is not on display at the train depot, which is no longer where the chamber board meets.
• More than 60 people crowded into the Cherokee County Board of Commissioners’ meeting room, many with concerns about spending plans made by the three commissioners who had been voted out back in the May primary. Jerry Kilpatrick, founder of the Cherokee Country 9-12 Project, told the commission that he was “not against government spending, but against reckless government spending.” Update: The Cherokee County Courthouse expansion and renovation project, along with the purchase of what because the Department of Social Services building, were eventually finished.
25 years ago: The Nantahala Regional Library’s 1995 Summer Reading Program, Nature Tales and Trails, was an enormous success, according to children’s librarian Deborah Annis. There were 535 young readers were enrolled in the program’s activities, with 261 at the Murphy Public Library, 138 at Moss Memorial Library in Hayesville, 48 at the Andrews Public Library and 88 at the Graham County Public Library.
• A familiar face in Cherokee County was highlighted on the front page of the Cherokee Scout after becoming the owner of the WKRK Radio in Murphy earlier in the summer. Tim Radford, who officially became the owner on July 20, said he was young compared to owners of other radio stations. “I’m the youngest that I know of,” Radford said. “Most station owners tend to be in their 50s and 60s, and I’m 22.” Update: Radford is still running things today at WKRK.
• The Continuing Education Division of Tri-County Early Community College was offering “Football for Moms and Housewives,” a three-day, six-hour course where ladies could learn about offense, defense and special teams in addition to rules, positions and strategies. Jay Moultrie, host of The Coach’s Corner on Teleview Channel 4, led the course.
50 years ago: Mrs. Marianne Vitito, daughter of Mr. and Mrs. Marvin Driver of Andrews, added another major victory to her long list of shooting awards by capturing the National Women’s Smallbore Rifle prone championship during the National Rifle Association of America at Camp Perry, Ohio. Mrs. Vitito, known as “Candy” to family and friends, posted a total of 6,363 points out of a possible 6,400 to win the competition by six points.
• A total of 20 men from the Tusquitee Ranger District, headquartered in Murphy, returned home after nearly two weeks of fighting forest fires in Idaho and Washington. Those from the area were Jack Thompson, James Crisp, Arvil Stiles, Marshall Allen, Larry Bishop, L.C. Loudermilk, Tyrone Burnette, Tom White, Edwin H. Manchester, Glen Beaver, Earnest Sudderth, Howard Kilpatrick, Wayne Roberson, Ralph Freeman, Low Reid, Clifford Stringer, Jefford Jackson, Harvey Stiles and Hoyt Dockery.
• The lead couple of the Senior Carolina Sweethearts clog team, Rosanna Redford and Donald Gladdis, won first place at the Apple Festival in Hendersonville, defeating the defending champion A.C. Reynolds Dancers for the trophy.
– Noah Shatzer