Walking into the new Murphy Rehabilitation & Nursing building is like stepping into a luxury hotel.

“There are so many luxurious touches throughout the entire building that there is just not any other skilled nursing facility in our area that compares,” said Kelly Roberts, executive director of the facility.

The wonder starts with the lobby complete with a fireplace. Guests are greeted by a receptionist at a large curved desk. Down the hallway is the main dining hall, with a private dining room on one side and a restorative one on the other.

A more casual dining space is the open-concept Duncan’s Tavern. It has one of four electric fireplaces in the building as well as a game table, bar seating, four tables and an entrance to one of the two courtyards.

Roberts can see residents enjoying the space with the doors open and music playing. “It would be the most fun place for gatherings,” she added.

The space is named after Noah Duncan, who founded Century Care Management, the parent company of Murphy Rehabilitation & Nursing. All other facilities in the company have a Duncan’s Tavern, and so will Murphy.

The facility has a chapel, open concept activities room, two living rooms with fireplaces, a cinema with an 82-inch television, beauty shop and a rehab gym.

For staff, there are spacious nurses stations, plus multiple storage rooms and janitor’s closets, allowing the halls to stay clutter-free.

The building’s wings are named Mountain Side for long-term care and Meadow Side for short-term care. Then each hall is given a road name, like Azalea Lane or Poplar Trail. The administrative staff named the halls with names that have something to do with North Carolina.

Residents will be moving into the 69,080-square-feet building soon. The project was originally scheduled to be completed this summer, but construction had delays due to COVID-19 affecting suppliers’ ability to provide items on schedule. 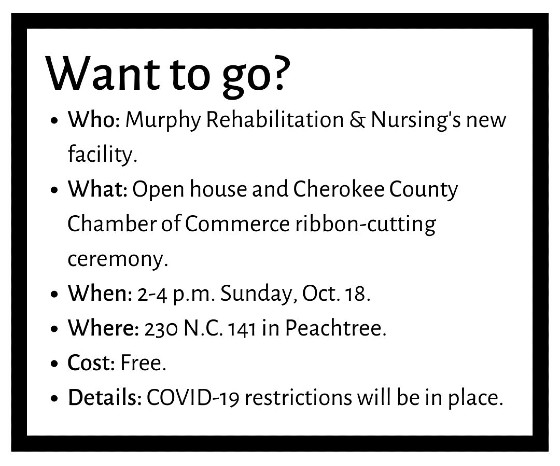 Residents are scheduled to move in the week of Oct. 26. Since there are about 80 residents, the logistics are extensive. Plans are in place to keep everyone safe.

The new facility is only .25 miles away at 230 N.C. 141, so the plan is to use facility vans, vans from sister facilities, Cherokee County Transit’s wheelchair-accessible van and an ambulance to for residents who require stretcher transport. Residents will be divided into groups of no more than eight, each with two staff members, including one certified nursing assistant, for the move. Each resident’s medical records and medications will be transported with them, and each resident will wear a name tag providing vital information.

Residents whose family members cannot participate in moving their belongings will be assigned a staff member who will take care of the job. The goal is for all residents’ rooms to be ready by the end of the day Sunday, Oct. 10.

The new facility has 42 private rooms and 78 beds for long-term nursing. There are seven halls with a total 134 beds. The rooms are much larger, providing ample space for families to visit their loved ones.

The bathrooms, and the independence they allow, are a favorite part for Roberts.

“I do love that the residents all have a shower in their room. These showers are designed so beautifully and efficiently, they absolutely thought of everything that would promote their independence in the best way,” she said.

The bathrooms also have tilting mirrors, allowing personalized positioning for both standing and wheelchair-using residents. The sinks have handholds to help residents pull themselves up to a standing position.

Each room has a 30-inch smart television with DirecTV and the ability to use streaming devices. Roberts said the size of the rooms and bathrooms will also make things easier for staff providing hands-on care.

Some rooms are porch rooms, with picket fencing that residents can sit behind and be social with others. There’s even a faux window, with curtains painted on by Emily Fulford, the facility's activities assistant.

The new facility is also in a better position to handle COVID-19 requirements.

At the end of Poplar Trail are two secure doors that lead to the Alzheimer’s hall, or Cardinal Way.

The hall opens to its own combined living and dining room area which opens up to a secured patio. The space allows residents to safely come and go through as they wish, weather permitting.

Just past the living area, Cardinal Way has 14 beds, with two private rooms.

As the population grows, so will the need for more registered nurses, licensed practical nurse nursing assistants and patient care assistants. Applications for nursing positions are available at murphyrehabandnursing.com/careers.html.

The new facility has contracted care partners in housekeeping and laundry services through IH Services, and dietary through Culinary Services Group.

They will also continue to partner with Carolina Therapy Services for rehab needs. “Any therapist would be blessed to join their team,” Roberts said.