Andrews – Veterans of Foreign Wars Post 7620 is hosting its third annual Fire in the Valley Chili Cook-off on Saturday, Jan. 23, and Commander Scott Ramler and co-organizer Tony Anderson are working hard to keep the event safe.
“That’s our first concern, everyone’s safety,” Anderson said. “We’re going to take all the precautions we possibly can. If we thought for a second there could be something bad coming from it, we wouldn’t do it.”
One major change is they decided to have the event in a larger indoors location, Valleytown Cultural Arts Center on Chestnut Street. Last year’s event was outdoors at Hall Park, but the weather was cold and rainy, limiting the event’s success. The VFW Post building on First Street was too small for effective social distancing indoors, Anderson said.
They will also be providing masks for anyone who wants one, will have hand sanitizer available and are considering having a nurse on hand for entry screenings. Anderson said the VFW has the full support of the Town of Andrews, and the Andrews Chamber of Commerce is a co-sponsor.
“Anything we raise stays in the county,” Anderson said. “It’s used to help veterans in Cherokee County.” 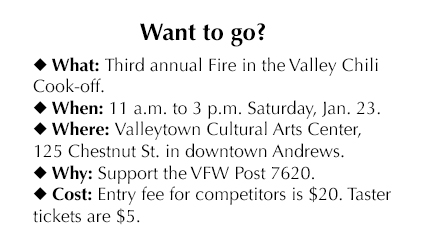 The VFW often uses funds it raises to help veterans get housing and pay utility bills. It has also helped purchase items for the veteran stand-down organized by the Cherokee County Veterans Services at the Welcome Home event in October, and also plans to re-establish a scholarship program.
Ramler said the event is even more important this year, as the post has been unable to do most of its usual fundraising in the past year.
The entry fee for competitors is $20. Winners are determined by popular vote by tasters. Taster tickets are $5. Competitors have until Friday to submit their entry form and payment.
Rambler said while it’s a fundraiser, they want it to be a fun community event.
“People should want to participate to show off their cooking skills, as chili can vary greatly in different regions,” Ramler said. “We encourage cookers to have a team name, mascot and a friendly rivalry.”
There will also be vendors, including local breweries and wineries, and musician Tom Edwards is scheduled to perform. Winners will be announced at 2:30 p.m. There will be trophies made by Coffey Customs as well as prize money for the top three entries.
The VFW started the chili cook-off three years ago after deciding they wanted to hold a big annual event that could grow each year.
“We wanted to do something in winter, when people are looking for something to do,” Anderson said.
Entry and vendor forms are available on the chamber of commerce’s website, visitandrewsnc.com/chili-cook-off. For details, email vfw7620@gmail.com.