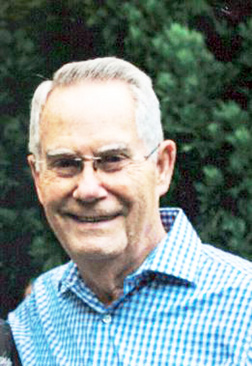 Ray L. Ballard, 82, of Murphy, passed away Thursday, Dec. 17, 2020, at his home surrounded by family.
He was born in Dade City, Fla, but was raised in Hillsborough County on Ballard’s Corner. He had served in the U.S. Army.
Ray began working as a printer while in high school with D.C.T. work program. Ray took pride in being a printer and eventually became self-employed. Ray was the source of nearly all printing that took place in Plant City for many years.
He enjoyed vacationing in the mountains with his family for many years and eventually bought a home in Murphy in 1995.
Locally, he had worked with the Cherokee Scout and Walmart and volunteered at the Sparrow’s Nest at Murphy First Baptist Church.
Ray was a member of Ranger Baptist Church. He was a member of the Lion’s Club in Plant City.
He and his wife had welcomed several international exchange students into their home.
Ray’s family meant everything to him, and he spent his life putting them first.
He was the son of the late, Arthur and Nina Webb Ballard. He was also preceded in death by a sister, Nina Mae Ballard; and two brothers, Arthur Wayne Ballard and Brigadier General Terry Otis Ballard.
He was blessed with a marriage of 56 years to his loving wife, Sandra Boswell Ballard. In addition to his wife, he is survived by a daughter, Tina Marie Polk of Murphy; a son, Ray Lamar Ballard Jr., of Murphy; a brother, Jerry Lavone Ballard of Dover, Fla.; five grandchildren, Jack Polk, Robert Polk III, Ashlee Therrel and husband Tommy, Shawna Ballard, and Noel “Trey” Martin III; seven great-grandchildren, Jackson Polk, Aletrus Margandona, Raylee Polk, Baylee Ballard, Elijah Therrel, Annsleigh Martin and Avery Therrel; and his beloved nieces and nephews.
Memorial services were held at 6:30 p.m. Tuesday, Dec. 22, in the chapel of Ivie Funeral Home, Murphy, with the Revs. Jimmy Tanner and Jimmy Hogsed officiating, and military honors provided by Hayesville American Legion Post 532. The family requested those who attended wear a mask.
Inurnment will take place at a later date at Oaklawn Cemetery in Plant City, Fla.
The family received friends prior to the services from 5:30-6:30 p.m. Tuesday, Dec. 22.
In lieu of flowers, the family requests memorials be made in memory of Ray Ballard to the Sparrow’s Nest, 517 Hiwassee St., Murphy, NC 28906.
Ivie Funeral Home, Murphy, is in charge of all arrangements.
An online guest register is available at iviefuneralhome.com.