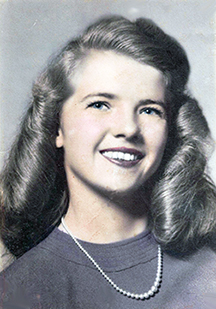 “… and we shall dwell in the house of the Lord for ever” (Psalm 23:6).
Early in the morning of Wednesday, April 8, 2020, our mother, Helen Pearl Foster Morris, went to dwell with the Lord. She would have been 93 years of age Tuesday, May 12.
Mrs. Helen Morris was raised in the Ranger community. When she left as a young person seeking employment, she found a job as a secretary in Akron, Ohio. In Ohio, she met, through friends, Albert J. Morris of the Martins Creek area, who had also come to Ohio seeking employment after working with the Civilian Conservation Corps Camp on Nottely Lake. They fell in love, and a lasting, loving relationship began. They came back to North Carolina to be married at Mrs. Morris’ childhood home in Culberson. The old barn and shed still stands on the property off U.S. 64.
While in Ohio, where they made their home, Mrs. Morris continued to work as a secretary, and becoming a mother of two girls took to part-time work. While Mr. Morris was working as a tire builder, he taught himself how to build houses.
In the late 1960s, they had a vision of returning to their childhood home of the North Carolina mountains. They knew the area was a route to the Smoky Mountains so they decided to build, one of only two or three motels with a restaurant in the area, on U.S. 64, which was then just a two-lane highway.
They built on Mrs. Morris’ family land, some of which remains in the family today.
When the restaurant opened, it did not take long for word to spread about the country cooking being served there. Not only to the motel’s customers, but to people from all of the community, who came from all around.
She would cook three meals a day, large stacks of pancakes in the mornings, hamburgers (that she never shared the recipe) at lunch and wonderful seasoned pot roasts, steaks and chicken. She knew how to season the food like our country people liked it. There were pies, apple, blueberry and peach, always on the counter along with sweet tea.
These were times when there were few jobs here for young people. She would employ young people so they would have spending money and be able to save for college.
The four-lane was soon built, and she fed all the workers that were building the road.
Sundays were the busiest days at the restaurant, as everyone in the community came to share a meal after church.
She will be remembered as someone who worked very hard and gave back to the community when viable employment was scarce.
She will also be remembered for the beautiful flowers that people would stop and take pictures of around the home. Some people would stop and ask for cuttings or roots from her plants and she would gladly share.
She was a member of Murphy First Baptist Church.
She was the daughter of the late Fred and Viola Gregory Foster and wife of the late Albert Jay Morris Jr., who died June 1, 2001.
Surviving are two daughters, Carol Morris Sirockman of Murphy and Karen Morris Henderson and husband, Jerry of Blairsville, Ga.; a sister, Barbara Ann Hawkins of Murphy; five grandchildren, Robert J. Henderson, and Lauren Henderson Dillinger and husband Derick, all of Blairsville, Ga., Christina Sirockman Alexander and husband Cary, Christopher Sirockman, and Matthew Sirockman and wife Farley, all of Atlanta, Ga.; seven great-grandchildren, Jax, Parker and Myles Dillinger, Thaddeus and Maisie Henderson, and Elizabeth Cary and Caroline Morris Alexander; a few nieces and nephews and great-nieces and nephews.
A private graveside service was held at 2 p.m. Thurs-day, April 9, in the Bellview Community Cemetery
with the Rev. Johnny Foster officiating.
In lieu of flowers, the family requests memorials be made in memory of Helen Pearl Foster Morris to the Alzheimer’s Association, P.O. Box 96011, Washington, DC 20090-6011 or Truett Baptist Association Children’s Home, TBACH, 2235 N.C. Highway 141, Marble, NC 28905.
Ivie Funeral Home, Murphy, was in charge of all arrangements.
An online guest register is available at iviefuneralhome.com.