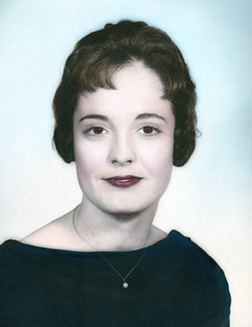 “Absent From the Body; Present With the Lord”
Gayle Fariss Bechard
1939-2020
Always kind, considerate and generous, Gayle Anne Fariss Bechard, resident of Murphy and Ormond Beach, Fla., passed away peacefully at her home Monday, Jan. 27, 2020.
Gayle will be deeply missed by all who loved and laughed with her.
Born in Blakely, Ga., on Jan. 12, 1939, to John William (Bill) and Augusta Hammack Fariss, she was the fifth born in a line of seven children. Her formative years were spent in Blakely, where she attended first through 12th grades, making lifelong friends whom she never forgot. She graduated from Blakely Union High School in 1957.
Shortly after graduation, August 1957, she married James Edward Kelly. In 1960, they had their only child, James Mark Kelly, the love of her life. Later they divorced, and Gayle moved around for many years.
She remarried Richard Paul Bechard in December 1973. He was a Chief Petty Officer in the Department of the Navy, assigned to work on aircraft carriers along the east coast and overseas. They settled in Orlando Fla., where Gayle worked at McCoy Field Navy Base for several years and then took a position with the Orange County School Board, where she eventually retired.
Mostly a “homebody,” she enjoyed opening her home to family and friends, and though she stayed close to home, the thrill of her adventure to Israel with friends was a favorite topic.
She loved the Lord and the Word of God. Her faith was strong and firm to her last breath.
Gayle was preceded in death by her father; mother; three brothers, William Edgar Fariss, Donald Ray Fariss and infant Steve Fariss, as well as one sister, Peggy F. Sellers.
She is survived by her son, James Mark (Marie) Kelly of Dothan, Ala.; two brothers, Carl Hammack (Barbara) Fariss of Louisville, Ky.,and John Wayne (Judy) Fariss of Blakely, Ga.; one sister, Kay F. Cole of San Antonio, Texas; as well as a long-time companion, Larry Lorenzen of Murphy. She also leaves behind a host of friends who will forever remember her smile, love and humility.
Gayle’s family would like to acknowledge the medical care and treatment provided by her nephew-in-law, Dr. John Harpring and the staff at Norton Hospital in Louisville, Ky., who began the journey with her. There were many others along this 14-month ordeal, who gave compassionately of their time and care. To mention a few, the Murphy Medical Center, The Emory ALS Center, the Erlanger Western N.C. Hospital, and the Mountain Home caregivers and therapists.
According to Gayle’s wishes, she was cremated, and no public service will be conducted.