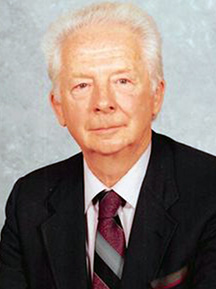 Edward F. Rife passed away Tuesday, Oct. 6, 2020, at the Birches in Newtown, Pa. He was 92 years old.
“Ed” as he was affectionately known to his family and friends, was born Aug. 7, 1928, in Philadelphia to the late Edward J. Rife and Adeline V. Rife. He was the husband to the late Anne K. Rife, who passed away in 2002 (Murphy).
Ed graduated from Dobbins Technical School in Philadelphia and served honorably in the United States Army during World War II and the Korean War Conflict.
Living in Rochester, Mich., he worked as a tool and die engineer for many companies in the automotive industry, which included Rebmann Products Corporation, Rebmann Plastic Molding, Black Box Incorporated, Husky Injection Molding Systems and the Ternstedt Division of the General Motors Corporation.
Ed served two terms as president of the Society for Plastics Engineers in Detroit, Mich.
In his free time, Ed and Anne enjoyed traveling, drove through 11 countries in Europe, and travelled nationwide for over 5 years in their RV. He was a scoutmaster for the Boy Scouts in the 1960s. He contributed to the Methodist Church in Murphy in their active food bank, as well as attending many classes at Campbell Folk School in Brasstown.
Ed is survived by his children: Donald E. Rife (Jan), Beverly A. Stevens (Ron), Patricia E. Rife-Beavers (Ralph Stephen), Jeffrey J. Rife (Teresa); along with his grandchildren: Alison (Brad), Katie, Sarah (Eric), Aubrie, Ian; and his great-grandchildren: Laurel, Reid, Layla, and one great-grandson on the way. Ed is also survived by two brothers: Richard Rife and Alan Rife. He was predeceased by his brother, Warren Rife.
A formal memorial service will be held Thursday, Oct. 22, at the National Cemetery, Washington’s Crossing, Pa.
Memorial contributions in Ed’s name may be made to a charity of one’s choice.
Family services are entrusted under the care of Swartz-Givnish of Newtown, Pa., www.swartzgivnish.com.