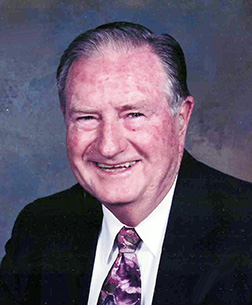 Charles T. Manson, 89, of Murphy, passed away Monday, Feb. 3, 2020, at Murphy Rehab & Nursing and entered into his heavenly home.
Charles was born in Indianapolis, Ind., on April 20, 1930, to the late Charles and Gertrude Manson.
He moved to Murphy in 1990. He was a successful insurance broker.
In addition to his parents, he was preceded in death by his daughter, Beverly Johnson; and brother-in-law, Kenneth Forbes.
Charles is survived by his wife of 70 years, Gloria; children, Charles Jr. (Janis), Jeffrey (Janet), Mark (Debora) and Gloria (Daniel) Lutz. He is also survived by nine grandchildren, 14 great-grandchildren and two great-great grandchildren; son-in-law, Wesley Johnson; sister, Marcia Forbes; sister-in-law, Margaret Baker; and cousin, Loretta LaCorte. He is further survived by other cousins, nieces, nephews and friends.
He enjoyed the outdoors and loved fishing. He also anticipated and loved every meal prepared lovingly by his wife. He was a man of faith and service who never met a stranger.
A graveside service will be held at 11 a.m. Saturday, Feb. 15, at Greenlawn Memorial Gardens, 582 Greenlawn Cemetery Road Murphy. A Celebration of Life reception will follow at Julie’s Place, 30 N.C. 141, Murphy.
In lieu of flowers, donations may be made to the National Kidney Foundation, 30 East 33rd St., New York, NY 10016.
Cochran Funeral Home of Murphy is honored to serve the family.