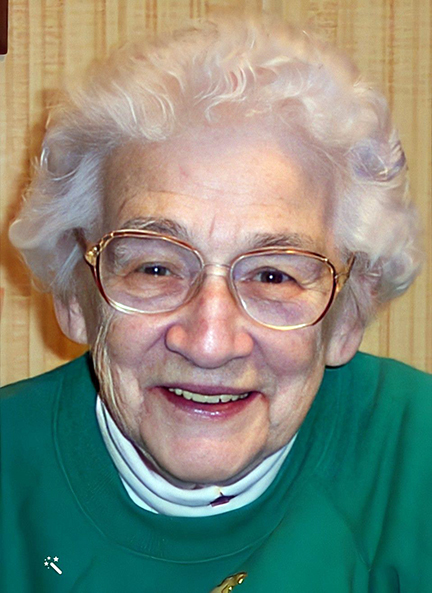 Marion Beatrice “Bea” Robinson Hogan completed her earthly journey Saturday, July 18, 2020.
Born in Andrews on Nov. 12, 1918, Bea arrived to a world ravaged by war and caught in the midst of a deadly Spanish flu epidemic. Her “Papa” joked that the world knew one day of peace, as Bea was born one day after the treaty to end World War I.
The eighth of nine children of William Edgar Robinson and Arie Dell Almond, Bea had four older sisters (Beryl Whit, Elizabeth Flowers-Hughes, Josephine Waldroup and Nannie Millsaps), three older brothers (Lewie Price, William Benjamin, Huey Decatur), and one younger brother (Shuford Edmond).
After graduating from Andrews High School, Bea attended John C. Campbell Folk School in Brasstown, where she learned weaving and woodcarving along with traditional Appalachian arts, music and dance. There Bea met her future husband, Frank Hogan, who reportedly declared, “That’s my wife, boys, if I ever get her!” upon first seeing Bea. The couple made a home in Brasstown and worked at the folk school.
In 1954, Frank began a 25-year-career position as maintenance superintendent at YMCA Blue Ridge Assembly. The family, now with sons, Edmond and Jerry, relocated to Black Mountain. Two years later, the family welcomed a daughter, Candas Beryl “Candy.” The management of Blue Ridge soon discovered Bea’s versatility and tasked her with leadership of many guest service areas.
In May 1980, Bea and Frank returned to Brasstown, and were grateful for the support of extended family and the Little Brasstown Baptist Church community after the loss of their youngest son, Jerry, on June 6, 1980.
Even after Frank’s death on Sept. 5, 2002, Bea continued to take joy in her faith, and in helping family and friends. When it was no longer wise for her to live alone, she moved in with a granddaughter to help with her young family. Shortly before her 101st birthday she took residence in an assisted living community better equipped to meet her needs.
Bea’s greatest contribution in life, no matter where she was, may well have been her impact on youth. In Brasstown, she was “Aunt Bea” to just about everyone. At Blue Ridge, she was an unforgettable first (and “best”) boss. And young people searching for a little touch of home, a listening ear, or sound advice always found Bea and Frank’s door open.
Bea is survived by her son Edmond and wife Kay of Taylors, S.C.; and daughter Candy and husband Mike Sabato of Swannanoa; five grandchildren; 10 great-grandchildren; and innumerable nieces and nephews and their children and grandchildren whom she loved as her own. She will also be missed by friends around the world whose lives were impacted by hers.
A service will be held at a later date.
You may send tributes to the Hogan family at townson-rose.com.
Townson-Rose Funeral Home is in charge of all arrangements.