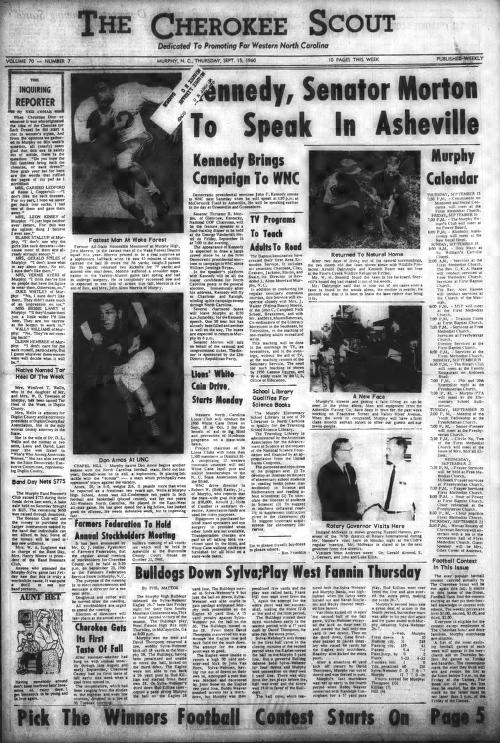 In this week’s archives of the Cherokee Scout and Andrews Journal:
10 years ago: The larger of the two water reservoirs that fed into Andrews’ public drinking water was being carelessly polluted to such a degree that the town decided to take action, adding more signs designed to keep people away. People making the Dan Holland Reservoir a campground were leaving trash, including items such as batteries and other garbage, littered around the lake.
• The Unaka Community Center was preparing to celebrate its unique history with a Heritage Day that included a ribbon-cutting ceremony with Cherokee Chamber of Commerce Executive Director Phylis Blackmon, a presentation on the Cherokee culture of western North Carolina by T.J. Holland, director of the Junaluska Museum in Robbinsville, and many other guest speakers.
25 years ago: Van Brown of Andrews was seeking to demonstrate the economic value of raising trout on three local Tennessee Valley Authority lakes. Brown, who was already in business with two fish farms in Nantahala, formed Carolina Trout Co. and said he could generate annual revenue of more than $5 million if he was allowed to use floating net-pens to raise trout on the lakes.
• The Murphy Volunteer Fire Department received a new 1995 Freightliner Pumper, which replaced its 1963 engine limited to pumping 750 gallons per minute. The new fire truck was capable of pumping 1,250 gallons per minute and could also carry 1,000 gallons of water as a dual pumper/tanker, according to assistant chief Al Lovingood.
• Cherokee County students who participated in the 1995 SATs placed 10th in overall high achievement scores for North Carolina. The 1995 score – 877 – was a 30-point increase over the previous year’s score and reflected the local system beating the state average of 865.
50 years ago: Andrews Police Chief Milton Mashburn and N.C. Highway Patrolman Bob Ogle demonstrated the new Breathalyzer machine installed in Andrews. The $1,100 “hunk of equipment” was the second Breathalyzer installed in Cherokee County, with the first in Murphy. Officers would be required to complete a special 68-hour training course and receive a certificate from the State Board of Health before being allowed to administer the test.
• A six-room frame house, inhabited by Frank and Helen Greene on Grape Creek, burned to the ground by a fire of unknown cause. Volunteers from Murphy held the blaze under control for a while, but ran out of water and the house was consumed before they could replenish their supply, although no one was injured.
– Noah Shatzer