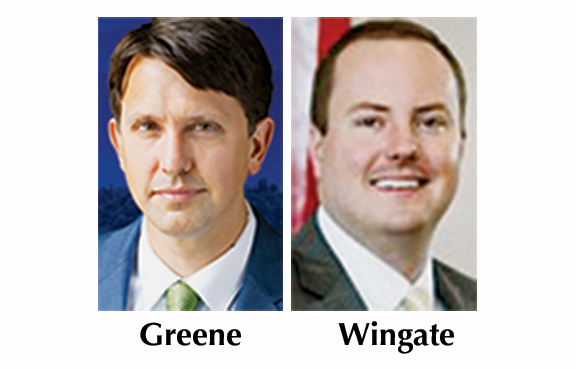 Treatment courts, often called recovery courts or specialty courts, are designed to help chemically dependent offenders with their court-ordered treatment plans. North Carolina has six different types of treatment courts – not counting tribal court – none of which are within the 30th Judicial District.

“The state cut funding for treatment courts back in 2011, so they’re either going to have to be 100 percent grant-funded or going to have to be picked up by the [taxpayers],” Greene said while declaring his support for specialty courts in this district. “We probably need one for DWI or drugs … but until that happens, I think there are other ways that we can use some of the solutions from treatment court in our cases.”

Wingate said the 30th District would benefit from having drug, DWI and veterans treatment courts. However, funding would most likely have to come from state or federal sources.

“That funding has to come from Washington, D.C., or Raleigh; we cannot do that on our own,” he said, adding that a specialty court established in the 30th District would have to be available to residents in all seven counties.

“I would not stand for someone in Murphy being treated differently than someone in Waynesville. I would not work together with these programs until everybody in this seven-county district has the same opportunity. I believe in liberty and justice for all, and that means everybody who comes to court in this district is treated the same.”

Greene and Wingate are vying to become a district court judge for the jurisdiction that includes Cherokee, Clay, Graham, Haywood, Jackson, Macon and Swain counties. The debate was hosted by WKRK and live-streamed on the local radio station’s Facebook page.

Greene, a Democrat from Bryson City, has worked in this district since 2006. He touted his experience practicing “every type of law a district court judge could practice.”

“My job has been perfect training to make me your next district judge because I’ve worked in a small town in our district,” he said. “In [Bryson City] you do a little bit of everything if you practice law there.”

Wingate, a Republican from Haywood County, has served as a prosecutor, in addition to having his own private practice. He positioned himself as more experienced than Greene by touting his time served as an assistant district attorney.

While addressing recidivism in the district, Wingate said treatment programs could help stop the revolving door of crime.

“I would say 80-90 percent of the criminal cases and most of the civil cases that we see relate back to a substance abuse disorder and it’s a disease,” Wingate said. “Oftentimes, incarceration is not targeting that disease. I think we should give some folks a greater chance of obtaining treatment through successful treatment programs.

“Until the disease is treated, the person will be committing property crimes, doing everything they can do to maintain that impairment. Without these programs, I really worry if we’re going to see a true turnaround with the opioid crisis that we’re seeing.”

Greene echoed those comments. He said as a judge, he would implement ideas from treatment and problem-solving courts to “get to the root of the problem to stop recidivism.”

Although the judicial code of conduct prohibits them from making blanket statements as to how they would rule in a particular case, both attorneys said continuous alcohol monitoring could be a useful tool as a condition of pretrial release for a defendant whose crimes involved alcohol.

Both candidates also expressed the importance of making the right decisions regarding cases involving children.

“Cases involving children are no doubt the most important cases that a district court judge handles,” he said. “That’s why it’s so vital that you have someone serving as a judge that has experience as a prosecutor. I have handled cases involving the sexual and physical abuse of children. I know the intricacies of that law. A very large portion of my practice now involves DSS court.”